Fresh fruit and vegetables such as soft fruit, melons, tomatoes and leafy greens have been implicated in the highest number of foodborne illness outbreaks amongst the food commodity groups. In the case of leafy greens, there have been 18 outbreaks in the previous four years, implicating pathogens such as Escherichia coli O157:H7, Salmonella and Listeria monocytogenes, along with the enteric protozoan, Cyclospora and Cryptosporidium. Regarding food waste, fresh produce also tops the list amongst foods and is estimated to account for 35% of waste. This likely reflects to perishable nature of fruit and vegetables, coupled with processing that tends to reduce rather than enhance shelf life.

When washing doesn’t cut it

Fruit and vegetables can be contaminated from various sources, from the seed used to cultivate crops through to production, harvesting and at food service. In production, the general approach is to prevent contamination entering the chain through pathogen testing, and more recently, treatment of irrigation water.

Post-harvest washing is the main intervention step applied during fresh produce processing and can apply a range of sanitizers such as chlorine, peracetic acid and chlorine dioxide. However, it was noted back in 2005 that washing is limited in removing contamination and more likely to distribute pathogens between batches, especially if the sanitizer concentrations are not maintained in the background of accumulating organic matter. In 2017, the US Food Drugs Administration (FDA) published a white paper that acknowledged that the best that could be achieved by washing was to minimize cross-contamination as opposed to decontaminating fresh produce. It also was noted that the wash process cannot be validated and verified, which is a key theme of the Food Safety Modernization Act (FSMA). Processing of fruit and vegetables also reduces shelf life as spoilage microbes are introduced during the wash process and plant tissue becomes highly hydrated. Consequently, a whole lettuce head would have a longer shelf life when compared to bagged salad, although less convenient.

With the food safety and waste problems facing the fruit and vegetable sectors, it would be anticipated that the industry would embrace alternatives to post-harvest washing. One also could consider that technologies such as UV would be more effective and environmentally favorable to chemical methods. Yet, those who have ventured into the fresh produce sector frequently are met with barriers, despite the benefits of using new technologies. By understanding the origins of such barriers, it is possible for them to be overcome, so interactions with the fresh produce sector will be reviewed in this column. It should be noted that the following are from conversations rather than formal research.

Human pathogens are introduced from uncontrollable sources; testing would pick them up. There is a perception in the fresh-cut sector that pathogens are introduced into the chain due to the actions of others. For example, if pathogens are introduced from irrigation water, then the upstream feedlot farm is responsible. The pathogens found in soil are from manure heaps or from wild animals. Several also would point out that testing will catch any contamination and, if not, then it will be handled upstream. In reality, testing is an ineffective approach to food safety given the sample size has to be large to detect pathogens. Yet, it is a narrative that prevents the introduction of novel technologies that remove biological hazards.

Foodborne illness outbreaks happen, and it’s usually someone else. In numerical terms, the number of foodborne illness outbreaks vs. volume of product produced is low. However, those caught up in an outbreak would tell of the turmoil of recalling products and the subsequent litigation. Yet, there are processors willing to play the numbers game in the hope that they never get caught in an outbreak. One also could attribute this to the oversight of an FDA that is reluctant to point fingers at processors and growers. This was well illustrated in a 2020 outbreak linked to romaine lettuce that was not revealed until it was discovered by a Washington Post reporter. In a more recent example, an outbreak linked to lettuce served at a fast-food restaurant caused over 100 cases of E. coli O157:H7, but the FDA never revealed the processor or original grower. The underlying reasons for the reluctance of the FDA to name growers and processors are multi-faceted but can be associated with the close links of the regulator body in developing food safety initiatives, along with the risk of identifying the wrong actor. This was evident in the Salmonella outbreak originally linked to tomatoes (severely disrupting the industry) but subsequently traced to peppers supplied from Mexico.

The washing process was recommended by food safety experts. Despite the overwhelming science that illustrates the limitation of washing, many processors highlight that a consultant and/or supplier has told them the benefits of washing. Even though such claims rarely are backed with test data performed in the field, the advice gives the user a justification to deflect responsibility to those providing the advice. This often is why government regulators and auditors refrain from providing specific advice on technologies. In some instances, a food safety manager or consultant who implemented the wash process may be reluctant to suggest alternatives as that may imply the original advice was wrong, leading to a preference to keep the old approach rather than being innovative.

How can the technology be integrated into a pre-existing process? Many food-processing facilities have limited space and introducing a new technology likely would cause disruption. However, for food-safety interventions, it is more common to find a place on pre-existing lines; for example, a conveyer. A benefit of UV is that reactors are versatile and so can be adapted to integrate into a line, although custom units are more expensive to design and construct. However, a big barrier to UV is the ability to handle the volumes encountered in fruit and vegetable processing, along with treatment times. A typical post-harvest wash can vary from 30 to 180 seconds, depending on the process. Although a UV dose could be delivered within such times, a single layer would need to be conveyed and turned to ensure the entire surface of the product is exposed. This can be managed through material handling but would require engineering and, inevitably, changes to the processing line.

I have been bitten too often by snake-oil technologies. In the wake of foodborne illness outbreaks, the industry commonly is overwhelmed by the latest sanitizer or technology. The marketing within the sector is aggressive and typically not supported by science. There was one example of a sanitizer that was reported to be highly effective against pathogens and supported by paid advertisements in high-profile newsletters or associations. However, claims were not supported by peer-review papers or third-party studies. It could be argued that those promoting ozone as an alternative sanitizer to washing did forward exaggerated claims that sold generators to industry but failed to deliver the claimed benefits.

Food safety does not sell. Many processors outwardly would promote the narrative that food safety is their number one priority. In some cases, this is correct – especially in relation to the major companies. However, for others in the sector, food safety is an incurred cost that cuts into the bottom line rather than delivers tangible benefits. Yet, there is a famous saying: “If you think prevention if costly then let me show you an outbreak.” An additional factor is that a tub of chlorine will be cheaper compared to hardware, despite the limited efficacy. However, this is not the full-story as UV-based technologies require little input after initial installation whereas sanitizers have to be repeatedly purchased.

Shelf life sells. Extending the shelf life of fruit and vegetables provides benefits that are recognized by the industry and retailers. This often is missed by those wishing to sell into the sector and focusing only on food safety. However, by focusing on shelf life, it is much easier to get one’s foot into the door – and then subsequently refer to the food safety aspect. A review of technologies that have become established in the fruit and vegetable sector have been with respect to the benefits of improving the product’s quality, nutrition or shelf life.

UV-based technologies have benefits over other intervention technologies. For example, the system is water-free, sustainable, leaves no chemical residues, extends shelf life and increases phytochemicals. In addition, UV has a long history with an abundance of validation data and can be monitored as part of a Food Safety/Preventative Control Plan. Despite such benefits, it is rare to see UV-based units operating within processing lines. To make inroads into the fruit and vegetable sector, the industry must highlight the tangible benefits along with providing a vision of how the technology can be applied within pre-existing processes. In addition, appreciating the barriers to introducing UV technologies and addressing such issues will increase opportunities.

The IUVA Food and Beverage Safety Working Group explores the latest updates on the science-based validation and commercialization of UV-C technology for plant growth stimulation or suppression, nutrition enhancement, fungicide and pesticide reduction, wash water sanitation and postharvest disinfection, as well as use for nonthermal, low UVT beverage treatment. 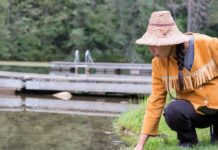