Nearly two years after the COVID-19 pandemic began, indoor air quality and safety remain widespread concerns among Americans. In homes and workplaces alike, demand has grown for air filters and purifiers, including those that use ultraviolet (UV) light technology – products that the United States Environmental Protection Agency (EPA or the agency) typically has regulated as pesticide devices under the Federal Insecticide, Fungicide and Rodenticide Act (FIFRA) because of their ability to remove bacteria and viruses and other “pests,” as defined in the statute, from the air.  Specifically, the combined market for air filters and purifiers stood at $2.9 billion in 2020 and is projected to exceed $4.3 billion by 2026.  EPA has cited concerns that consumers may be misled about the efficacy of such products in minimizing exposure to COVID-19. To this end, in April 2021, the agency published a notice on its website, declaring that it would scrutinize product labels and online marketing materials to ensure that devices entering US commerce are not misbranded within the meaning of FIFRA Section 2(q)(1)(A).

In implementing this mandate, EPA is not limiting its review to new claims that product manufacturers have made directly in response to the pandemic. Rather, EPA is considering the totality of marketing claims that appear on product labels and labeling. For companies whose products have been on the market for some time, this means that the EPA functionally is reconsidering longstanding statements that passed muster when reviewed in the past or may have gone unnoticed. Where efficacy claims are deemed to be deficient, EPA has alleged that distribution of filters and purifiers would constitute a violation of FIFRA Section 12(a)(1)(E), which makes it unlawful for any person to distribute or sell a misbranded pesticide product. As a result, affected businesses with existing products must re-evaluate their marketing.

Types of Claims That EPA is Scrutinizing

The notices of refusal issued by EPA to those companies deemed in violation have not always been accompanied by detailed explanations of the alleged deficiencies. However, it seems that EPA generally is focused on the following types of claims:

By focusing on such claims, EPA is signaling that industry must be prepared to support, with hard data, all product efficacy claims regarding regulated pesticide devices. Although EPA is not describing its current mandate as a new policy, its present stance is not entirely aligned with its past regulatory posture, and certain apparent tensions stand to impose considerable burdens on the regulated industry.

EPA’s insistence that pest capture claims refer to organisms that were the subject of actual efficacy testing applies even to filters that operate to trap particles based on size, regardless of the organic nature of the pest. This breaks with past practice, whereby EPA, for example, found no issue with companies that predicated pest capture claims upon their products meeting the definition of a true HEPA filter. Now, even if such companies can demonstrate HEPA efficacy, they are being required to couch their efficacy claims in terms of specific organisms that have been the subjects of efficacy testing. More general claims that such filters capture 99.97% of germs, bacteria, viruses, mold, fungus and other microbial pests with a diameter of 0.3 microns or more are being rejected. This degree of precision seems a priori excessive, and EPA has not articulated clearly why it is necessary in such a scenario.

In the same vein, EPA has required that companies demonstrate that air filters and purifiers meet a minimum standard of 99.9% before claiming that such products are “effective” in removing a given pest. This 99.9% requirement derives from EPA guidance regarding antimicrobial surface disinfectants and nonbinding recommendations regarding air sanitizers.  In short, it appears to be a claim historically grounded in the agency’s regulation of pesticides, such as surface cleaners and aerosol sprays, as opposed to pest devices.

In some instances, EPA has scrutinized device components to the same extent as pesticide devices. For example, components such as UV-C bulbs have been refused entry for inadequate labeling even though these components were not yet installed in a device.

As these examples demonstrate, EPA is staking out the regulatory gray space under its new mandate to protect the public against potentially misleading claims. Moreover, EPA generally is refusing to provide what alternate language would be acceptable to correct allegedly deficient claims. Consequently, companies are left to consider whether to make scanty claims to avoid allegations of misbranding, to undertake additional efficacy testing to support more robust claims, or, alternatively, to recast existing claims in a highly technical and detailed fashion, which risks overloading consumers with information and, therefore, may make marketing less effective.

The situation is particularly acute for importers of air filters and purifiers, many of whom placed foreign orders for these devices months before EPA initiated its new regulatory scrutiny. Under FIFRA Section 17, pesticide device importers must submit Notices of Arrival to EPA before bringing any shipments into the United States to provide the agency an opportunity to inspect the shipments, and EPA has recommended that Customs and Border Protection (CBP) refuse entry to products that it has deemed to be misbranded under its current mandate. Accordingly, importers whose products have passed scrutiny in the past, but which now are alleged to be misbranded, must scramble to take corrective action within a narrow timeframe or risk having their products destroyed by CBP within 90 days pursuant to the procedures in Section 17(c)(1).

Such importers are left to choose among potentially unappealing options. Returning products to their points of origin may be prohibitively expensive due to significantly increased shipping costs caused by the pandemic. Shipping the products to different foreign facilities that are closer than the point of origin for relabeling may be an option, but any facility where labeling will occur must have an EPA establishment number, as required by FIFRA Section 7 and 40 C.F.R. § 152.200.

Alternatively, importers can elect to pay a penalty in order to relabel the products within the customs territory of the US.

EPA is adopting an aggressive enforcement posture, which reflects its apparent viewpoint that safeguarding against potentially misleading claims outweighs the risks of further disrupting the supply of air filters and purifiers at a time when such products are in high demand. The agency’s current stance has important implications for both manufacturers and importers, especially since the EPA is not restricting its enforcement mandate based on the past acceptability of a given claim. Accordingly, manufacturers and importers may wish to closely review their product claims and reconsider their marketing goals in view of heightened enforcement risks.

Reza Zarghamee advises US and international clients on a vast array of environmental matters, including compliance with chemical regulation statutes, strategies for performing compliance audits, transactional due diligence, remediation, rulemaking challenges and SEC disclosures. He has extensive expertise in assisting clients, including both importers and manufacturers, obtain EPA and FDA approvals for new chemical substances and products being introduced to the US market. He also routinely helps companies resolve compliance deficiencies and defend against agency enforcement actions and investigations. For more information, email [email protected] or visit www.pillsburylaw.com. 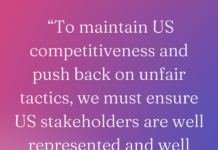 Industry Influences from WEFTEC and the Infrastructure Bill