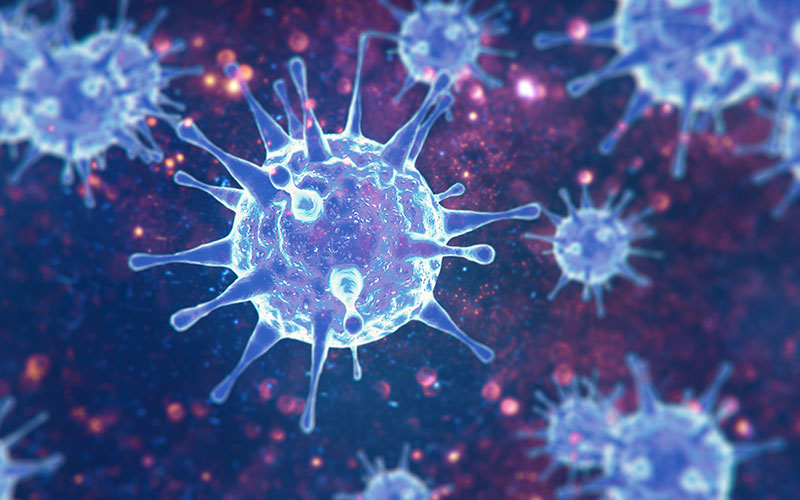 Ultraviolet (UV) radiation is a broad-spectrum antimicrobial agent that has been applied successfully in a wide range of disinfection applications. UV radiation in the wavelength range 200 nm ≲ λ ≲ 320 nm, sometimes referred to as germicidal or microbicidal UV radiation, is known to cause damage to DNA and RNA that results in inactivation of microorganisms and viruses. For radiation with wavelengths less than about 240 nm, damage to proteins can also contribute to inactivation.

Given that all viruses contain a nucleic acid molecule, either DNA or RNA, and a protein coat (called a capsid) that surrounds the nucleic acid, all viruses are susceptible to inactivation by exposure to UV. However, viral sensitivity to UV is quite variable; the development of a comprehensive understanding of the causative factors is still an active area of research.

SARS-CoV-2 (aka the novel coronavirus) is the virus that causes coronavirus disease 2019 (COVID-19). Transmission of COVID-19 appears to be largely associated with airborne particles that may be released by symptomatic or asymptomatic individuals who have been infected by SARS-CoV-2,1 although it also is known that the virus can remain infective on surfaces for as much as 24 to 72 hours, depending on the material it is in contact with,2 so contact with surfaces represents another possible mechanism of disease transfer.3

Previous research has allowed definition of UV dose response behavior for other, closely related viruses. To date, three studies have been published that have reported UV dose response behavior of SARS-CoV (Figure 1); this is the virus that caused an epidemic of Severe Acute Respiratory Syndrome (SARS) that affected roughly 8,000 people in 26 countries in 2003.4 All of these studies were based on UV radiation at or near the wavelength (254 nm) that characterizes the output of low-pressure (LP) mercury lamps, which are the most commonly-used source of germicidal UV radiation.

Structurally, SARS-CoV and SARS-CoV-2 are similar viruses. Both are non-segmented, enveloped, single-stranded RNA (ssRNA) viruses. It is likely that the UV dose response behaviors of SARS-CoV and SARS-CoV-2 will be similar, though it is important to note that this has not yet been proven. Note also that there is considerable variability in the reported UV dose response behavior of SARS-CoV.

The variability evident in Figure 1 probably is due to deficiencies in the experimental methods that were used in some or all these previous studies. The stated fluences (doses) are probably overestimates, as the UV absorbance of the suspensions were not reported or explicitly accounted for. Similarly, it was not clear that the conditions of UV exposure would allow for accurate calculation of the UV dose applied to the viral suspension. Based on the information provided in the reported studies of SARS-CoV UV dose response behavior, the data set of Kariwa et al. appears to represent the most accurate, though it also may show false-high resistance.

Viruses often are characterized according to the presence/absence of an envelope, the form of their nucleic acid (single-stranded [ss] or double-stranded [ds]), and the type of nucleic acid (RNA or DNA); SARS-CoV-2 is an enveloped, ssRNA virus. The form of the genome may play an important role in governing the sensitivity of viruses to UV exposure.5,6 Emerging models based on nucleotide sequences have a strong basis with known UV disinfection mechanisms and may yield accurate predictions of the UV sensitivity of viruses.

Also included in Figure 1 are examples of the measured UV254 dose response behavior of coliphage MS2, a non-enveloped ssRNA virus, and Φ6, an enveloped double-stranded RNA (dsRNA) virus. These two viruses have similar UV sensitivity as the SARS-CoV of Kariwa et al. (2004). These data suggest that if the UV sensitivity of SARS-CoV-2 is similar to the Kariwa et al. (2004) data, MS2 and Φ6 may represent suitable non-pathogenic surrogates.

The effectiveness of UV-C radiation as a disinfectant is influenced by the wavelength of radiation. This behavior has become increasingly important in recent years with the development of alternatives to conventional LP or medium-pressure (MP) mercury lamps, including UV LEDs and plasma (excimer) lamps. The wavelengths of radiation produced by these sources depend on the chemical composition of the LED or the excimer. Collectively, these new sources provide access to radiation from across the germicidal UV spectrum.

It is expected that SARS-CoV-2 will display similar trends, but insufficient data are available at present to confirm or refute this hypothesis. The ultimate disinfection efficacy observed in an actual application will be influenced by the absorbance characteristics of the medium that is being disinfected. In some settings, there could be substances that could absorb strongly at wavelengths below 240 nm, which will mitigate the contributions of short wavelength UV-C radiation.

Most UV dose response data have been reported for experiments wherein the target virus was suspended in water. These experiments are critical for UV disinfection of water; however, the mechanism of transfer of SARS-CoV-2 (and many other viruses) generally involves viruses that are suspended in air or attached to surfaces. For both conditions, the virus itself may not be suspended in water and may experience drying (desiccation). Desiccation, which will result from exposure to air and will be influenced by relative humidity (RH), is known to represent a form of stress for most microbes and viruses and may alter their sensitivity to other forms of environmental stress, including UV exposure, as illustrated in Figure 3.14-18 However, it should be noted that some studies have indicated that similar viruses (including SARS and MERS) may survive on surfaces longer at high RH than at low RH.19

During the period of development of this white paper, several early reports of responses of SARS-CoV-2 and related viruses to UV radiation were reported in the scientific literature and in press releases. A study conducted by scientists at the US Department of Homeland Security indicated that UV-B radiation in ambient sunlight at irradiance values that are representative of mid-latitude, mid-day summertime conditions will result in 1-log10 unit of inactivation in a time period of 7 to 15 minutes.20 A preprint publication by Bianco et al. (2020) reported that a UV254 dose of 3.7 mJ/cm2 accomplished 3-log10 units of SARS-CoV-2 inactivation when the virus was suspended in water.

Collectively, these results are promising; however, it should be noted that some important details of these experiments were not reported in these documents, specifically relating to methods used to quantify dose delivery to samples containing the target virus. It is likely publications in this area will continue to emerge, as well as the collective understanding of the effectiveness of germicidal UV radiation for control of SARS-CoV-2. To summarize, available evidence suggests UV radiation should be effective for inactivation of SARS-CoV-2 and other microbial pathogens. UV-based systems have important roles to play in battling SARS-CoV-2 in air, on surfaces and in water. However, like all common disinfectants (i.e., UV, chlorine, ozone), a need exists to quantify the kinetics of inactivation for SARS-CoV-2 for these applications. 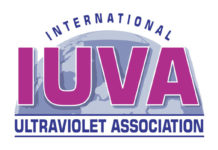 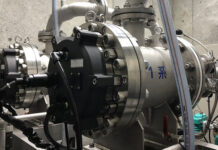