The city of Orange in Orange County, Texas, is located about 100 miles east of Houston and approximately 30 miles due north of the Gulf of Mexico. It is the state’s easternmost city and home to the Orange Waste Water Treatment Plant (WWTP). Located along the Sabine River, this municipal wastewater treatment plant with a peak capacity of 24 MGD serves 18,000 residents and is composed of the following unit processes: bar screens, grit removal, primary treatment, trickling filter followed by sedimentation and, finally, UV disinfection. The Sabine River is 510 miles long and, in its lower course, empties into Sabine Lake, which is an estuary of the Gulf of Mexico.

In early 2010, it was determined that the 20-year-old disinfection system at the Orange WWTP – a TrojanUV3000™ – was no longer able to meet the new Texas Commission on Environmental Quality (TCEQ) 217 Regulatory Requirements. During this time, the TCEQ was in the process of changing the permit of several plants that had an ultimate impact on the coastal discharge.

As a result, Orange WWTP’s (old) E. coli permit was changed to a new and more stringent Enterococci limit with the requirement to meet a daily maximum limit. Given the aging UV system and the new regulatory requirement imposed by the TCEQ, a disinfection system replacement was in order.

In addition to cost effectiveness and energy efficiency, the new system needed to be able to withstand flood events because the Orange WWTP is uniquely located just eight feet above the mean sea level.

The TrojanUV3000Plus™ system met all the specified criteria, including automatic lamp sleeve cleaning. The prior UV system was not equipped with this feature, and lamp sleeves were being cleaned manually by a third-party company, at a cost of approximately $35,000 per year.

The installation was composed of 64 UV modules, each containing six lamps, for a total of 384 installed lamps, which represented a 67% reduction in total lamps compared to the first-generation UV system.

The new UV system was placed into operation in late 2016. Little did the plant operators know that in the summer of 2017 the system would be put to the ultimate test.

On Aug. 26, 2017, Hurricane Harvey dumped more than 60 inches of rain on Orange. Due to its proximity to the Sabine River, the treatment plant was flooded with more than four feet of water, spanning the entire plant and completely submerging the UV system’s ballasts, lamps and lamp sleeve cleaning system.

The entire plant, including the UV channels, remained under water for 10 days, and while the system control panel and hydraulic system center remained untouched by the flood water, the site remained without power for nearly five days, as there was no backup generator.

Once the flood waters receded, a certified service technician from Newman Regency Group evaluated the overall condition of the UV system.

From this evaluation, it was determined that damage was very minimal, with damage noted on only two ballasts and no major issues associated with any of the electrical panels. A follow-up visit with two Trojan technicians to thoroughly inspect all 64 UV modules found no evidence of moisture intrusion.

The service recommendation was to replace the PDC enclosure gaskets and the two ballasts (the failure of these components is not believed to be related to the flood).

The robustness of the UV system to withstand the extreme flooding without any permanent damage was attributed to the Type 6P rated seals on each UV module and plant staff providing proper operations and maintenance to the UV system. 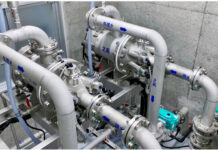