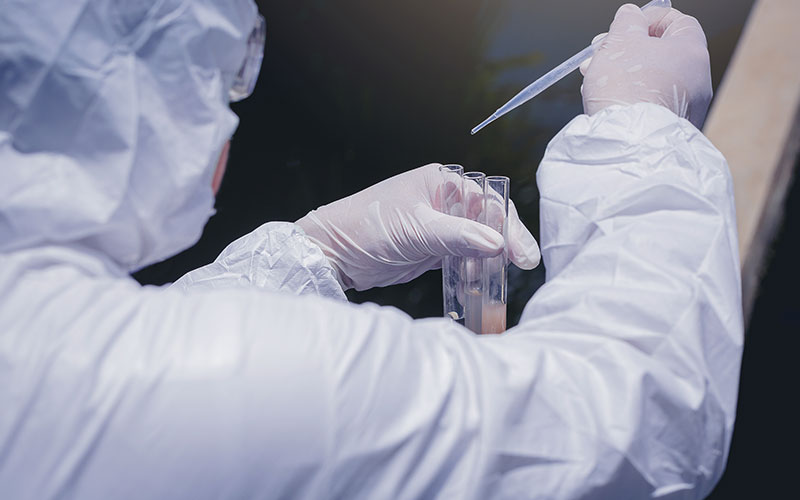 Advanced oxidation processes (AOP) have obtained a lot of attention in literature over recent years. However, not all compounds can effectively be oxidized because, in fact, they already are in an oxidized form. This is true, for example for halogen containing organic compounds (Vellanki et al. 2013), or bromate (Jung et al. 2014, Xiao et al. 2017b). In order to change their properties, like their adsorption on activated carbon surfaces, it might be better to apply a reduction process instead of an oxidation process to make them less hydrophilic (Schoutteten et al. 2016). In recent years, some research has been done in this field. AOPs can be characterized by the production of highly reactive reducing radicals. Often these are generated by applying UV radiation in combination with sulfite, dithionite, sulfide, odide, NaBH4 or Fe2+ ions (Bao et al. 2019, Dong et al. 2018, Duan and Batchelor 2014, Hara et al. 1999, Liu et al. 2014, Xiao et al. 2017b, Xiong et al. 2019, Zhang et al. 2015). 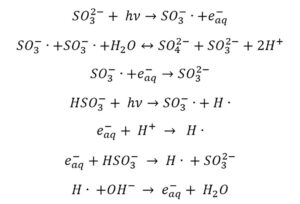 Conversion of organic micropollutants may be caused by direct UV photolysis, by reduction by hydrated electrons or by reaction with the sulfite radicals formed (Li et al. 2019). It was found that natural organic matter (NOM) competes with sulfite for the UV radiation, and, thus, may hinder the conversion of perchlorate (Duan and Batchelor 2014, Vellanki and Batchelor 2013) at relatively high concentrations of compounds, although Jung et al. (2017) observed a higher reaction rate in some cases. This may be caused by the formation of reactive compounds.

Increasing pH values and temperature were found to increase the reaction rate (Liu et al. 2013b, Qiwen et al. 2018). The sulfite concentration shows an optimum, above which mixing problems hindered further increase of reaction rate (Dong et al. 2018, Duan and Batchelor 2014, Qiwen et al. 2018, Vellanki and Batchelor 2013). The hydrogen radical that can be formed can react with chlorinated compounds, resulting in the formation of radicals and Cl2 gas. This effect mainly can be observed at pH values of nine to 11.

Schoutteten et al. (2016) compared the conversion of atrazine, carbamazepine, bromynil, diatrizoic acid and dinoseb by means of ARP and oxidation by ozone. They found ARP results in the formation of other types of products than oxidation. This indeed may result in better adsorption properties (e.g. for dinoseb and diatrizoic acid), but for atrazine and bromoxynil, no effects on adsorption properties were observed, and for carbamazepine even less adsorption on activated carbon was found.

In this work the removal of some metabolites of herbicides (desphenylchloridazone, metazachlor sulfonic acid, metolachloric acid and metolachlor sulfonic acid) by means of a UV/SO3 process was studied. These compounds often are found in sources for drinking water in the Netherlands and Belgium and are difficult to remove by means of e.g. AOP. The effect of oxygen concentration, type of UV lamp and water composition was determined.

Experiments were carried out in either Milli-Q water or drinking water from the city of Nieuwegein. In order to test the effect of bicarbonate, nitrate and DOC Milli-Q solutions with different compositions were prepared. The water compositions are shown in Table 1.

The effect of the type of UV lamp used is shown in Figure 1. From these experiments, it can be concluded that both metazachlor sulfonic acid and desphenylchloridazone can be degraded by means of MP photolysis. ARP by means of LP lamps is significantly less effective than by means of MP lamps. Besides, it seems that the presence of oxygen doesn’t always hinder the reaction and actually, in some cases, even seems to enhance the reaction.

Yazdanbakhsh et al. (2018) showed that the degradation of trichlorophenol, which was mainly attributed to the reaction with sulfite radicals, decreased from 95 to 75% under oxic conditions, but this difference might not prevent application in water treatment. This effect, however, strongly depends on the compounds involved, as shown in Figure 2.

Furthermore, it seems that the ARP conversion reaches a plateau, which might suggest there is a limiting factor involved. More research will be required to obtain more information about this.

In Figure 3 the effect of the type of water (drinking water or Milli-Q water) is shown.

From Figure 3 it can be concluded that both photolysis and ARP are more efficient in Milli-Q water than in drinking water. This may be due to competition or scavenging by other compounds present in drinking water like nitrate, natural organic matter and bicarbonate. To check this, the separate effects of these compounds were measured, as shown in Figure 4.

These results are a strong indication that the

presence of DOC has a positive effect on the conversion of micropollutants. However, there is hardly any difference between 1 and 5 mg/L. For both nitrate and bicarbonate, the presence of a low concentration seems to be advantageous for the conversion in comparison with Milli-Q water, but increasing the concentration further in general seems to hinder the degradation. However, for desphenylchloridazone, the opposite effect seems to occur. It’s not clear yet what causes this effect.

As both the presence of oxygen and NOM seem to enhance the conversion of micropollutants in some cases, the actual reaction mechanism is still unclear. It appears that other reactions than reduction processes may occur too. This will have to be studied further.

From this research it was concluded that ARP may be applicable for degradation of micropollutants in drinking water under oxic conditions. It is possible that under anoxic conditions for some compounds a higher degradation rate is found, but for some compounds the conversion will be in the same order of magnitude. It even seems that the presence of O2 and DOC may enhance the reaction. This raises the question whether the processes observed really are reduction processes, or that e.g. oxygen radicals or organic radicals are involved. MP UV lamps are more effective for this reaction than LP UV lamps.

These studies were supported by the Joint Research Program of the Dutch water utilities (BTO).

Duan, Y. and Batchelor, B. (2014) Impacts of natural organic matter on perchlorate removal by an advanced reduction process. Journal of Environmental Science and Health – Part A Toxic/Hazardous Substances and Environmental Engineering 49(6), 731-740.

Yazdanbakhsh, A., Eslami, A., Moussavi, G., Rafiee, M. and Sheikhmohammadi, A. (2018) Photo-assisted degradation of 2, 4, 6-trichlorophenol by an advanced reduction process based on sulfite anion radical: Degradation, dechlorination and mineralization. Chemosphere 191, 156-165.